Nothing is easier than misleading with statistics.

The creation of statistics, is about communicating information, but it is the sender’s idea of meaning.. The preliminary part is analyzing data and summarizing it to make some point. Few people understand the analysis part and so often make mistakes deriving meaning from the presentation.

You cannot easily become highly skilled, but it is not hard to know enough to recognize a misleading story. Think about the risk to misunderstanding.

The kinds of statistics you will see

There are many ways to present.

Common ones are data tables, line graphs, and pie charts. The form relates to the story you are trying to tell. A pie chart is usually about distribution. A line graph usually compares more than one variable and how they compare over time or volume.  A single line will show accumulated growth or rate of change.

People like this sort of presentation because we are conditioned to be visible and these contribute far more information than long descriptions or even data tables. That ease of interpretation is why you need to pay attention. Ask yourself about the meaning intended as well as any other meaning that is possible.

Think through purpose and whether there are other meanings you could apply.

Graphs are not facts, they are interpretation of facts. That’s different.

Take a line graph of the performance of the S&P500 for the last 90 years. If I want to get you to think the market is all very different now, I would present the graph like this. 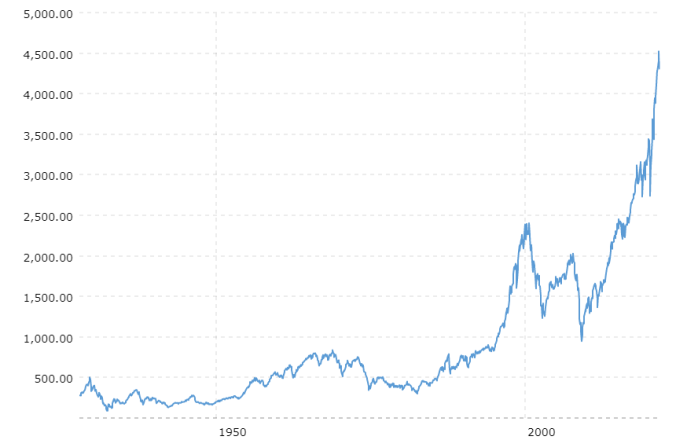 This graph displays accumulated value by year. Your automatic response is likely that sometime around 1980, things changed. It became more violent. Must be risky.

There are other ways to present.

Another graph of the same data presents it using a logarithmic scale instead of the linear one above. 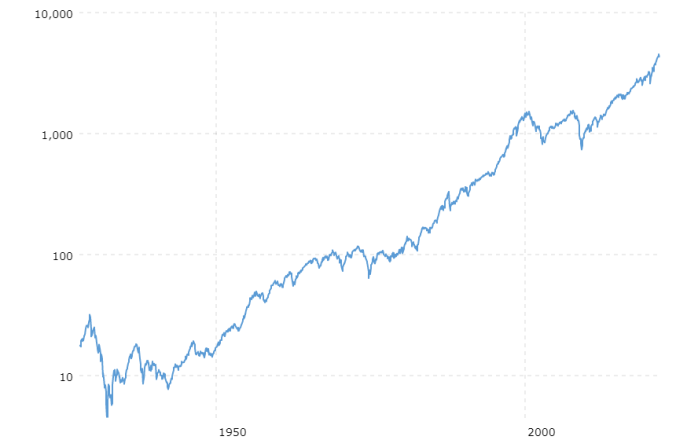 If you saw the linear format only you would not likely have an intuitive awareness of the logarithmic one.

Think about this. If the market grows 10% a year, when it is at 4000 it goes up 400 point the next year. That will look big on the linear format, ordinary on the logarithmic one.

Which was the worst?

When the market is high it takes large point drops to make it serious. Does the raw number strike fear into your heart? If all you read are headlines, it might.

Think about perspective. Meaning is what you want

Pay attention to the meaning not what the picture tells you at first glance.

Know how statistics fit into your context. If you know there is a 10% drop each year, and you don’t need the money that day, why is it fearsome?

If you expect the market to grow 10% a year before fees and taxes, shouldn’t you pay attention to the logarithmic graph instead of the linear one?

Understand the story being told from the storyteller’s point of view before accepting it as your story.